Optics – like many scientific terms the word has been co-opted in to many other uses. Most prominent at the moment in common usage must be as a political term. Ben Zimmer did some interesting work in uncovering the history as the On Language columnist at the Sunday New York Times Magazine. The first record appears to be from Jimmy Carter’s “inflation counselor,” Robert Strauss, who noted in 1978 that the president’s actions “…would be a nice optical step,” meaning of course that it would look good from a public relations standpoint. Through the 1980’s the word gained traction in the US and then the UK media, probably through French and French-Canadian influence. “Optique.” in addition to all the standard uses in physics, photography, etc is used to mean “perspective” or “point of view”.

Focussing on the physics (if you’ll allow me the pun) – “optics” is the branch of physics that studies the behaviour and properties of light, including its interactions with matter and the construction of instruments that use or detect it. At KS3 and KS4 this takes the form of reflection at different shape mirrors and refraction through different shape blocks…

The classic approach to optics is to start with investigations into mirrors and reflection. It’s reasonably trivial to show that the angles of incidence and reflection are equal but you can have a lot of fun by introducing problem solving – for example “How tall a mirror do you need to see your full refection?” – The answer is exactly half your height as you can explore using this lovely geogebra simulation by Markus Hohenwarter:

Note that there are a few technical terms in optics to describe what’s happening, some of these terms are introduced in this sim:

Ray – an idealized model of light, obtained by choosing a line that is perpendicular to the wavefronts of the actual light, and that points in the direction of energy flow

Object – The item that is being reflected or refracted, in this example it is the girl.

Virtual and real images come up a lot in curved mirrors which we here investigate using one of Tom Walsh’s Geogebra simulations.

We do need one more term;

Focus (or focal point) – this is the point where light rays originating from a point on the object converge after being refracted or reflected.

Following mirrors it’s on to refractive index – it’s really important to drill the idea of learning what happens when the wave changes speed – rather than the visual pattern. It’s very common for students (and even teachers) to draw refraction diagrams properly for square blocks but go very wrong when the square block is replaced with something of a different shape.

Light has a speed of light that is irrespective of motion and it is constant in different materials – if you start from Maxwell’s equations you can show that the velocity is given by two fundamental constants which account for the propagation of electric fields and the propagation of magnetic  fields;

As light enters a material other than a vacuum these values change and therefore so too does the speed of light. This shift in velocity is paired with a corresponding shift in the wavelength and so the frequency remains constant. We can see this easily as our eyes detect frequency as colour – because refracted rays do not change colour, they must be a constant frequency.

As always there’s a fantastic Phet simulation to play with and see how this change in speed affects the path of light:

It’s worth noting that though this blog post is full of simulations to play with, there’s a lot to be said for using the ray box and getting hands-on with it all. Just remember in the real world there’s always a little reflected light from the boundary of any lens. I really like these battery powered LED ray boxes… 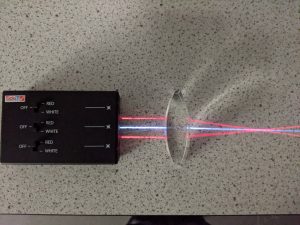 This simulation uses the equation above to plot the paths of the rays – be sure to move the incident ray below the normal;

and finally we get to ray diagrams for lenses.

A lens is very much like a development of two prisms stacked on top of each other: 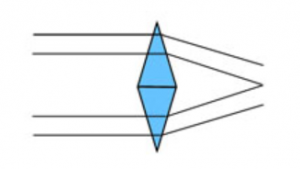 The rules of refraction are followed, resulting in the light rays converging, or diverging and the formation of images.

Again Tom Walsh’s  provides us with a great Geogebra simulation;