Whilst most explanations of the tides “it’s the moon’s gravitational attraction” are readily accepted by all, there’s a very significant issue that often causes a lot of confusion. The trouble is, the tidal bulge is not only on the side facing the moon ie. the water is not simply “pulled up” by the Moon – there’s a lot more going on, as you can clearly see in this screenshot of the lovely simulation at: https://www.schoolsobservatory.org/discover/sims-cals/tidesim 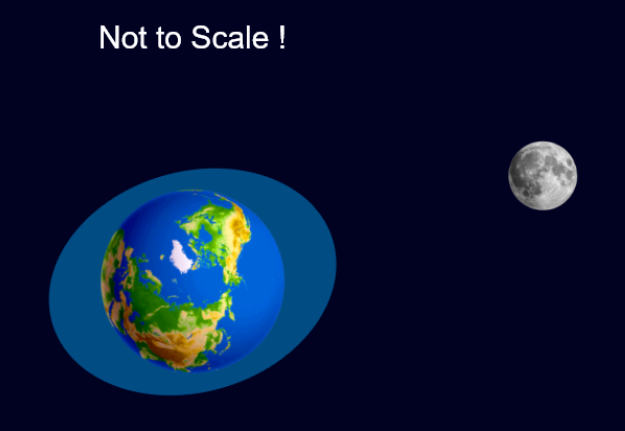 In order to address the issue we need to understand a few  things:

It is usual for us to simplify this to just the movement of the moon around our planet, treated in true geo-centric fashion as unmoving and inviolate. In this instance, the slight wobble of the Earth around this point is very significant.

Newton’s first law states that, if a body is at rest or moving at a constant speed in a straight line, it will remain at rest or keep moving in a straight line at constant speed unless it is acted upon by a force. This postulate is known as the law of inertia. In order for the Earth to orbit this common center of gravity, there must be a force upon it – this is provided by the gravitational attraction of the moon, and likewise the reverse is true.

In this way the interaction of gravitational attraction and Newtonian inertia create two bulges of water. We have ignored spring and neap tides however, when you factor in the same effect due to the position and rotation around the Sun you soon see how complex an apparently simple thing becomes.

There is an excellent description of this effect, explained in a different fashion here: https://noc.ac.uk/files/documents/business/Double-Bulge-Explanation.pdf

I recommend you check it out!